Each November, on the Friday evening after Thanksgiving, the Oakland Temple becomes a wonderland of more than 100,000 lights in celebration of the birth of Christ.

Against a backdrop of the sierra white granite of the temple, fountains, bushes, and lush flowers, the Christmas lights descend from an elegant pool to a glowing manger scene. The lights on the 42 palm trees averaging 60 feet high that line the sides of the pools attract the eye to the five golden spires that crown the temple.

The Oakland Temple Lights are included on the Best Christmas Lights in the East Bay list.

The lights illuminate the temple grounds every night beginning at dusk and remain on until 9:15 p.m. The grounds are open to the public and the nightly display lasts until December 31st. Masks and social distancing are required and there are no public restrooms available, so please plan accordingly.

For an interactive personal virtual tour of the center, go to templehill.org, click on “Book a Tour,” and enjoy the tour from the comfort of your home.

From the grounds of the temple, you can see for miles over the bay. Set on 18 acres in the Oakland hills, the temple offers spectacular views of Oakland and San Francisco out to the Golden Gate Bridge.

Though the rooftop gardens were closed for several months due to COVID-19, they are now open to the public. They can be accessed through the front courtyard and up the stairs on either side.

A statue of the Christus is visible through the floor-to-ceiling windows of the Visitors’ Center to the right of the temple. As you walk quietly past this beautiful statue you may feel the peace of a place devoted to Christ.

What is the History Behind the Lights?

The tradition of lighting the grounds for Christmas began in the late 1970s and has occurred every year since then, with the possible exception of 1989 when the temple was closed for renovation.

In the late 1970s, a group of local members of the Church of Jesus Christ of Latter-day Saints (often referred to as Mormons) put up about 10,000 lights. The display gradually grew to the current spectacular display of more than100,000 LED lights.

When the tradition first started there was an opening ceremony which drew large crowds and local civic leaders. However, in 2010 it was decided that this ceremony detracted from the peace that should prevail at the temple grounds, and a simple lighting at dusk took the place of the ceremony.

Putting Up the Lights

The lower lights—those on ground level up to those that can be installed with a six-foot ladder are put up by over 100 church members, from several of our local church congregations, who volunteer their labor for two Saturdays in November. The lights on the palm trees are installed by paid staff who use tall lifts to hang the lights.

The Oakland Temple has often been referred to as a beacon on a hill since it was completed in 1964. It is lit up year around at night and is visible to much of the Bay Area, with its tallest spire reaching 170 feet into the air. In fact, the FAA uses the temple as a navigation beacon.

How to Get There

The temple is located at 4770 Lincoln Ave., Oakland California. Although the Christmas lights don’t come on until dusk, the grounds are open from 7:00 a.m. to 9:30 p.m. The Visitors Center is open for virtual tours daily, see https://templehill.org/ for times and types of tours available. 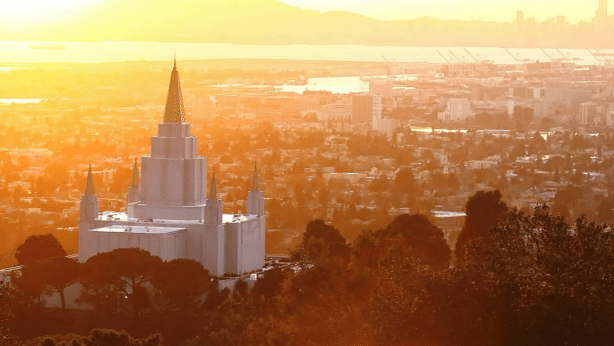 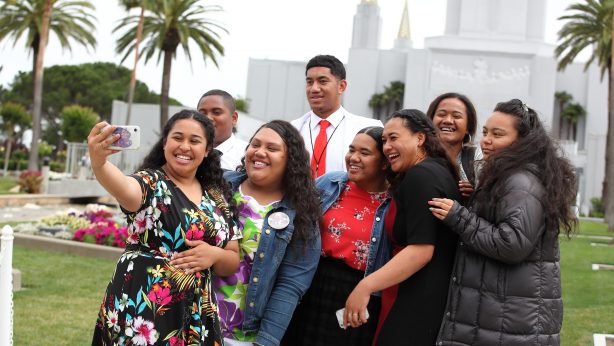 Temple Hill has unlimited locations when it comes to taking...

한국어
검색게시물로그인
21 Ways to Serve During a Pandemic and Stay-At-Home Order
Visible as a Beacon
Christmas Lights at the Oakland Temple
Best photo spots of the Oakland Temple
Family History is a Perishable Commodity
Where did the Church of Jesus Christ come from?